In its initial transparency report submitted on 22 June 2004, Nigeria indicated it did not have any stockpiled anti-personnel mines under its ownership or possession or under its jurisdiction or control.

Notwithstanding the obligation to destroy all stockpiled anti-personnel mines, the Convention permits the retention of the minimum number of anti-personnel mines absolutely necessary for the development of and training in mine detection, mine clearance, or mine destruction techniques. As of 2012, Nigeria has reported having retained 3,364 anti-personnel mines for these permitted purposes.

In its initial transparency report Nigeria indicated that there were no mined areas under its jurisdiction or control in which anti-personnel mines were known or suspected to be emplaced.

In its Article 7 report submitted in 2009, Nigeria indicated that it had identified areas in which anti-personnel mines were suspected to be emplaced. In accordance with Article 5 of the Convention, Nigeria undertook to destroy or ensure the destruction of all anti-personnel mines in these areas as soon as possible but not later than 1 March 2012.

At the 2011 Meeting of the Standing Committee on Mine Clearance, Nigeria announced that it had fulfilled its obligation under Article 5 of the Convention. On 29 November 2011, at the Eleventh Meeting of the States Parties in Phnom Penh, Nigeria presented a formal Declaration of Completion. 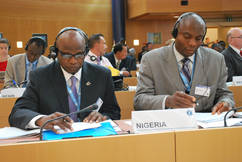 Nigerian delegation before the Standing Committee on Mine Clearance

Nigerian delegation at a press conference after declaring completion of their Article 5 in Phom Penh, Cambodia, in 211.