In its initial transparency report submitted on 20 June 2001, Mauritania reported stockpiled anti-personnel mines under its ownership or possession or under its jurisdiction or control.

Notwithstanding the obligation to destroy all stockpiled anti-personnel mines, the Convention permits the retention of the minimum number of anti-personnel mines absolutely necessary for the development of and training in mine detection, mine clearance, or mine destruction techniques. As of 2018, Mauritania has reported having retained 728 anti-personnel mines for these permitted purposes.

In its initial transparency reported, Mauritania reported areas under its jurisdiction or control in which anti-personnel mines are known or suspected to be emplaced.

In accordance with Article 5 of the Convention, Mauritania undertakes to destroy or ensure the destruction of all anti-personnel mines in these areas as soon as possible but not later than 1 January 2011.

On 10 April 2010, Mauritania submitted a request to extend its deadline. The request was granted at the Tenth Meeting of the States Parties, and a new deadline set for 1 January 2016.

On 2 April 2015, Mauritania submitted a second request for an extended deadline. This request was granted at the Fourteenth Meeting of the States Parties and a new deadline set for 1 January 2021.

On 29 November 2018, at the Seventeenth Meeting of the States Parties in Geneva, Mauritania announced that it had fulfilled its obligation under Article 5 of the Convention. 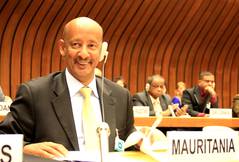 Mr. Alioune Ould Menane, Coordinator of Mauritania’s Humanitarian Mine Clearance Programme for Development, announces in Geneva that Mauritania has fulfilled its Article 5 obligation.