As of 2014, Eritrea has reported having retained 101 anti-personnel mines for these permitted purposes, 71 of which Eritrea indicates are inert.

In its initial transparency report submitted on 3 September 2003, Eritrea reported that it had no stockpiled anti-personnel mines under its ownership or possession.

In its initial transparency report  Eritrea reported that there were areas under its jurisdiction or control in which anti-personnel mines were known or suspected to be emplaced.

In accordance with Article 5 of the Convention, Eritrea undertook to destroy or ensure the destruction of all anti-personnel mines in these areas as soon as possible but not later than 1 February 2012.

On 31 March 2011, Eritrea submitted a request to extend its mine clearance deadline. The request was granted at the Eleventh Meeting of the States Parties and a new deadline set for 1 February 2015.

On 23 January 2014, Eritrea submitted a second request to extend its mine clearance deadline. The request was granted at the Third Review Conference and a new deadline set for 1 February 2020.

At the Oslo Review Conference in 2019, Eritrea was granted a temporary extension until end 2020, to present a formal request for extension of its mine clearance.

In 2020, the Eighteenth Meeting of the States Parties regretted that Eritrea did not submit such request ahead of its impending 31 December 2020 deadline which made Eritrea non-compliant.

Eritrea has indicated having significant numbers – hundreds or thousands – of landmine survivors, and has undertaken to provide for the care and assistance of mine victims.

Eritreat is not yet a State Party to the Convention on the Rights of Persons with Disabilities.

Eritrea is still required to report on established national implementation measures or whether it considers existing legislation to be sufficient. 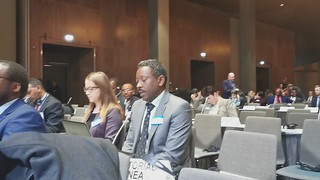